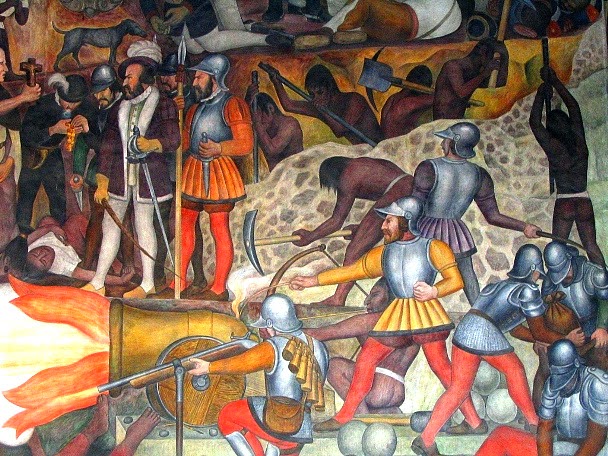 My daughter is taking AP World History and tonight she came to us simply appalled by the context of her textbook.

“The textbook just can’t say anything bad about white people,” she explained. Then she read me the offending sentence

From the time of Columbus, indigenous populations had been compelled to provide labor for European settlers in the Americas .

“They just can’t say what really happened, that they were enslaved by European settlers in the Americas,” she says angrily.

“Not once did they say they were slaves, “forced labor, Encomienda, terrible working conditions, forced to provide them with labor, textiles, food or other goods – so they basically stole their shit -, but not once did they use the word slavery.”  (Later she finds the textbook does use the word, but only when speaking about Brazil).

Despite its failures, the Catholic clergy did provide native peoples with some protections against the abuse and exploitation of Spaniard settlers.

“It’s not like the book was written in 1980, it was published in 2008,” she says frustrated. (The book is the 4th edition, there is a 6th edition now, but her School District decided to spend money building fences that make the schools look like jails, and huge TV screens teachers use rather than buying books.

She goes on reading, and gets to the part about Brazil.  She grows more appalled:

“It’s so sickening, they actually talk about them like they are animals.”

Although African slaves at first cost much more than Amerindian slaves, planters found them to be more productive and more resistant to disease.

“It sounds like a commercial: ‘Get rid of your Native American slaves, get some African ones – they will be more productive and resistant to disease, buy them now.’  It’s literally what it sounds like.”

I just had Camila’s 6th birthday party at the Chuck E. Cheese restaurant in Hayward, CA, and I thought I’d report back for those thinking of throwing birthday parties there. She had a lot of fun and I think it was a good birthday experience. Wouldn’t be my first choice to do it again, but it’s so easy and painless that I wouldn’t fight it either.
We decided to hold Camila’s party at Chuck E. Cheese because she’d gone to a party there and she really wanted it. I was a bit concerned that it was too cheesy (pun intended) and could get expensive, but it worked out very well – probably because we had a very small party (total of 8 kids and 6 adults). I think any more than that and it could get a little crazy. The kids had a lot of fun and Camila was happy. I also only ended up spending about $150, which is probably what I would have spent if I’d had the party at home (though I’d probably had invited more kids). You can do it a bit cheaper than that, but not much.
Chuck-e-Cheese has a couple of different party packages, though they mostly vary on what goodies the birthday child gets. Offerings and prices also vary by location, apparently in other parts of the country they are much cheaper than here. Here, the cheapest package was $14 per kid and it included a reserved table, plastic crown & medallion for the birthday kid, as well as 30 seconds in their “ticket blaster” (a machine that drops tickets on the kid, which the kid can then try to pick up, and 2 small slices of pizza per kid and a drink. That’s it. No cake or anything else. They have a minimum of 4 kids per party, and I saw no reason to make reservations for more than 4 kids – as I’d have to pay $14 for the other kids just to get two measly pieces of pizza. So I just reserved for 4 kids and 8 adults, and ordered items not in the party package for the rest of the kids and adults. That worked out very well. If you sign up for their mailing list, they’ll give you a coupon for a large 1-topping pizza, 4 drinks and 40 tokens for $20, and you can use the same coupon 3 times. A couple of pizzas were enough for all the adults & extra kids, and they brought us extra cups.
The party was in every other way painless. We got there, were taken to our table (at the back of the room, where the party tables are) and met our hostess. We placed all our orders with her (she’ll take the coupons), and she brought everything we needed, from tokens to napkins. We got a birthday cake ($16 for 1/4 sheet) and a piñata ($20), and she dealt with that too (lightening the candles, cutting the cake, setting out the pinata, etc.). In other words, I didn’t have to do anything.
The food was pretty good, Chuck-e-cheese’s pizza is definitely edible and the cake wasn’t worse that most supermarket cakes.
Now, we had our party on a Sunday at 1:30 PM. Chuck-e-cheese was super crowded at the time. By 3:30-4, when we left, the place was pretty empty. So I’d say to go with a mid-afternoon party if you can. Doing it on Sunday and reserving online gives you 100 free tokens!

Mika at the Motorcycle races

Last Sunday Mike took the girls to the American Motorcycle Association races. One of the people raising was Elena Myers, a 16 year old girl. She actually won a race on Saturday – the first female to win an AMA race. Of course, this made Mika all excited about racing motorcycle – something I’d encourage if we had the money for her to do it.
In any case, she was interviewed at the races by the Contra Costa Time and her voice and picture appear on a slide show about Elena. Take a look (or listen) to my little girl:
http://www.contracostatimes.com/news/ci_15098506?nclick_check=1

In this clip, Camila sets out to make bombons (from a box) and Mika films her:

Theme by Anders Noren — Up ↑