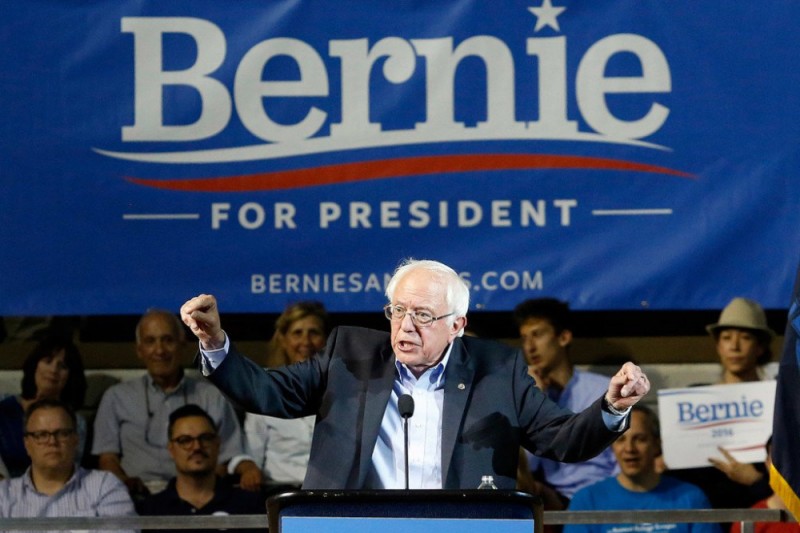 I’m a human rights activist (mostly focusing on Latin American) and a newly re-elected member of the Alameda County Democratic Central Committee.  I’m an ardent Berniecrat and I’ve just been selected to be a California PLEO (“party leader and elected official”) delegate for Bernie!  I couldn’t feel more humbled and more honored.

I believe that the Democratic party has an incredible opportunity this July in Philadelphia: to stand up for the principles that it claims to advance: human rights and social justice, a clean and healthy planet, peace and the rule of law, equality and a real democracy.  It could – at least in theory – reject the corruptive influence of big money, choose principle over campaign contributions, and support the one candidate that actually stands up for regular people: Bernie Sanders.  That is the message I will bring to Philadelphia.

Please help me cover the exorbitant travel costs.  Hotel rooms at the convention hotel are $650 a night (plus tax) and the rest of Philly seems to be booked already!

You can make a paypal contribution here*

Thank you in advance for your generosity,

*NOTE: Please DO NOT contribute if:

The FBI Doesn’t Want Hillary to Know What They Know

Yesterday (4/21/16) there was an interesting update on the Hillary Clinton e-mail saga.

Some time ago, Vice News filed a FOIA suit for the e-mails that Clinton had deleted from her server which the FBI is reported to have recovered. The Department of Justice filed for summary judgment against Vice News.  Generally, when you file for summary judgment, you give your reasons why summary judgment should be granted.  In this case, the DOJ could have argued that they couldn’t produce the e-mails because they hadn’t actually been recovered.  Or they could have argued that they had been recovered, but they concerned personal matters and therefore did not constitute government records or were protected by privacy exemptions.  They could have even argued that they had recovered e-mails but these e-mails all included classified information.

They didn’t do any of those things. Instead, they filed a “Notice of Lodging of Classified, In Camera, Ex Parte Declaration.”  That would be a document that only the judge in the case is authorized to read, where the DOJ explains their reasons for requesting a summary judgment.  The problem with such declarations, of course, is that as the plaintiff can’t read them, they cannot answer the arguments in them.  They are usually only used when there are national security considerations.

In response, Vice News filed a motion to require the DOJ to, at the very least, release the non-classified parts of their answer or explain why this cannot be done.  The judge granted the motion, and the DOJ has until April 26th to do so.

Now, it’s very possible that the DOJ is just abusing the system and that there is no legitimate reason to hide from the public – or anyone else – their rationale for not releasing Hillary Clinton’s deleted e-mails.  But if the DOJ is actually justified in filing this classified declaration, we can speculate as to why that is.

I think the most likely reason is that they don’t want Hillary Clinton to know whether they have, indeed, retrieved her deleted e-mails before she is interviewed by the FBI in the investigation as to her server.  While there are reports that the FBI had recovered some e-mails, these have not been confirmed and it’s not publicly known how many of the deleted e-mails the FBI was able to ultimately recover.

By now, I think it’s pretty clear that Clinton is considered at the very least a subject, if not a target, of the FBI investigation.  Unlike former Secretary of State Colin Powell, Hillary Clinton has said publicly that she has not been contacted by the FBI.  If the FBI saw her merely as a witness – as is the case with Powell -, they would have interviewed her right away to get as much information as possible from her to aid their investigation.   The fact that they haven’t suggests that the FBI does not want to interview her until they have independently gathered as much information as possible in the case.  Then, they can trip her.

For example, the FBI could ask her: “Did you delete or cause to be deleted any e-mails related to your work as Secretary of State other than those you handed to the Department of State? ”  If she says “yes”, she has just admitted at destroying government records.  But if she says “no” and it turns out that the FBI had uncovered such deleted e-mails, she can be prosecuted for lying to the FBI – a felony that carries a maximum five year prison sentence.   If Hillary knew for sure that the FBI had not recovered the deleted e-mails, then she could probably feel comfortable in lying about this.  If she knew for sure that they had recovered them, then she might decide that her best bet is to tell them the truth or – more likely – not meet with the FBI at all.  But as long as she doesn’t know what they have, she can’t really know how best to play this.  That’s what the FBI is counting on.

FBI Director James Comey said today that the FBI will not necessarily have concluded their investigation by the time of the Democratic convention.   That should concern all Democrats, a post-convention indictment (or, what’s more likely, a mere recommendation for indictment) could very well serve not just the Presidency but many other offices to the Republicans.

Note: This article has been edited for clarity

Theme by Anders Noren — Up ↑